It was founded in November 2009 by Nigel Harper, following a visit to Utale village in 2008 when he met Fr Francis Kachere and the leprosy patients he cares for. Nigel had been interested in leprosy since 1982 when he worked for 6 months as a volunteer at the Ordre de St Lazare Leprosy village of Djifanghor in Senegal, W Africa.

The other trustees are Dr Rosemary Harley OBE, a lecturer in microbiology from Strathclyde University with an interest in leprosy and aid work in Malawi and other developing countries, Doris Caldwell who is active at Augustine church in Edinburgh, John Burton, a healthcare professional from Edinburgh, and Norman Wagstaffe from Strathclyde University. 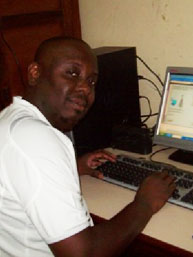 To Left: Fr Francis Kachere, director of the Utale leprosy community, working on a new computer provided by LUV+